A topper in patinaed copper on the mansard roof of 150 Central Park South will be converted into a triplex penthouse condo by our friends at SPAN Architecture. The famed 37-storey, limestone clad building, atop which it will sit, and which is known as Hampshire House, was completed in 1937, and is characterized by a distinctive series of cascading terraces on its northern facade, as well as its two chimneys. Though it is a famous building it is not listed as a landmark, and this permits the team to undertake extensive interior alterations there, including the addition of two storeys and the carving out of a 40′ window in the roof. The project came about when Peter Pelsinski of SPAN discovered that the topper, which housed the building’s mechanical systems, could be converted into two new floors with towering 14′ ceilings. 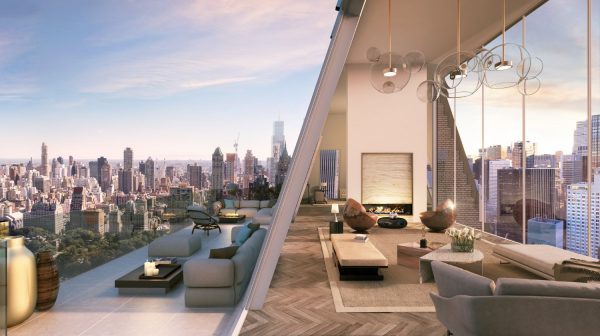