Next month, ground will be broken on the expansion of the landmarked Wilshire Boulevard Temple, a reform synagogue in Los Angeles, which is the oldest and one of the largest Jewish congregations in that city. Originally designed by Samuel Tilden Norton, this expansion will be undertaken by our friends at OMA | The Office for Metropolitan Architecture. Construction on the $75M project will commence with the new Audrey Irmas Pavilion; the expansion, which covers three-storeys, will include space for the congregation as well as supportive services for the surrounding Wilshire Center district. The Pavilion will comprise a large event space and a smaller more flexible space, as well as, notably, a sunken garden. The new floors are characterized by a sloping facade which angles away from the historic temple, with a series of openings that filter light throughout the complex. 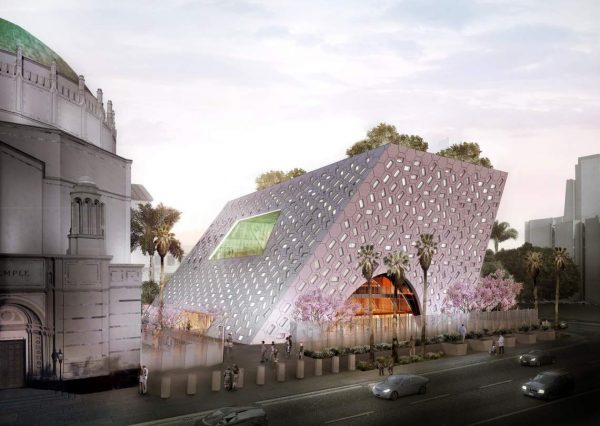