NYC audio post-production company and recording studio Sonic Union has enlisted the services of our friends at Revamp Interior Design to create a new working home for its team of sound designers, engineers, creative producers, and composers; to do so became necessary when the company grew too big for its original Union Square home. To the origami benches in the company’s new bright blue plywood-clad home, the firm added felt seat cushions and colorful throw pillows, as well as loose seating, tables and carpet tiles, referencing the patterns of the cladding. The space features four studios and three vocal booths; for the wall and ceiling of each of was installed a wall-to-wall stretched fabric acoustical track system. This was a necessary structural feature of the studios due to their function and necessarily constrained the design team in terms of creativity of material intervention; nevertheless, they still managed this, introducing to these spaces a scheme of fuschia plastic film and yellow tiles. 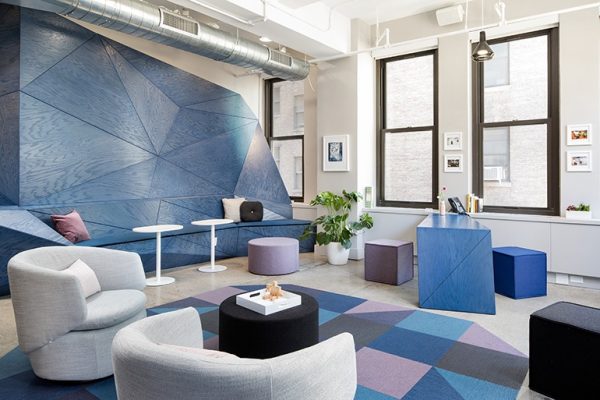