It is with great pride and satisfaction that we have successfully helped to facilitate the move and placement of Rumors of War, the statue by Kehinde Wiley created in response to Confederate monuments in the South, from Times Square to its permanent home at the Virginia Museum of Fine Arts (VMFA). His subject is a reimagined version of the Confederate general Jeb Stuart, created by Frederick Moynihan in 1907. It was an honor for ABC to realize the massive limestone plinth to support the revolutionary artists’ work. At over 80,0000 pounds of bronze, steel, and stone, the installation in Times Square and in Virginia had to be technically perfect and we are so pleased with the results. Special thanks to UAP Company, Emily Johnson, Precision Stone, Picco Engineering, Integrated Structures, and Don McGee for your tireless efforts. Extra thanks to Kehinde Wiley for the trust and impeccable vision. 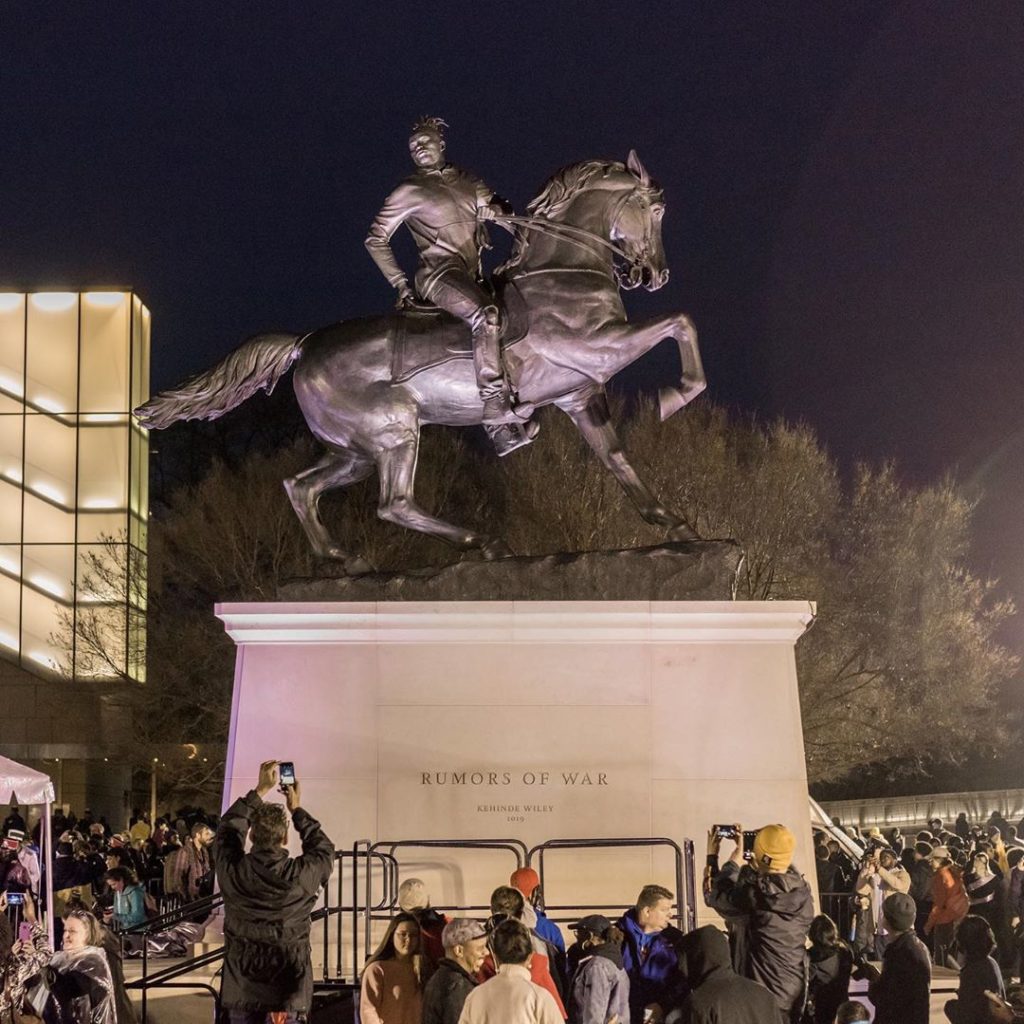 Nearly a century after the last Confederate statue was erected on Monument Avenue, a crowd massed Tuesday beneath gray skies and drizzle at the Virginia Museum of Fine Arts for New York-based artist Kehinde Wiley’s response: a muscular, triumphant African American astride a horse, looking defiantly toward the sky.

They cheered and held phones aloft, hoping to snap keepsakes of “Rumors of War” as handlers tugged on a tarp that, bogged down by rain, clung to the statue’s dreadlocks.

Minutes passed, but Richmond’s All City High School Marching Band played on. The majorettes twirled their batons. Organizers welcomed the thousand-plus attendees inside VMFA, but most waited outside in the rain.

Finally, after about a half-hour, Richmond firefighter John Lukhard climbed a ladder to cut the tarp free with a pocketknife. “It’s a funny thing in this job,” he said. “You never know what’s going to happen.”

“Rumors of War” is modeled after the monument to Confederate Gen. J.E.B. Stuart on Monument Avenue, which Wiley saw when he was visiting Richmond three years ago for his career retrospective, “Kehinde Wiley: A New Republic,” at VMFA. Wiley’s version depicts an African American wearing ripped jeans and Nike high-top sneakers.

The statue is stunning in size: Cast in bronze, “Rumors of War” is 27 feet tall, 25 feet long and 15 wide, and rests atop a giant limestone pedestal.

Wearing a colorful suit with a Nigerian-inspired design, Wiley greeted Richmond like a conquering general.

“I couldn’t think of any place better than the capital of the Confederacy” for the statue’s permanent home, he said in an interview with the Richmond Times-Dispatch. “Rumors of War” was initially unveiled in New York’s Times Square in September.

Known best for his official presidential portrait of Barack Obama, the 42-year-old Wiley has built his career addressing issues of race and power by painting minorities in the classical poses typically associated with wealthy and powerful white men.

He talked about how the face of the statue’s equestrian rider is based on a composite of six different African American faces.

“I want this … to be about black men and their place in this society. A society that can say yes to black men,” Wiley told those gathered.

Said Richmond Mayor Levar Stoney: “It’s taken more than 100 years, but the rest of Richmond residents finally have a monument of a man on a horse that looks like them.”

The newly renamed Arthur Ashe Boulevard in front of the museum was closed to traffic, and the diverse crowd of onlookers filled the street. There were no protesters or people waving Confederate flags.

The only voice of opposition seemed to be the United Daughters of the Confederacy, which is located next to the VMFA and hired officers to tell people to stay off the grass of its property.

The general atmosphere was one of celebration.

“Dedications of monuments in Richmond often reflect broader changes in our community,” said William Martin, executive director of the Valentine, which records Richmond history. “The erection of the Monument Avenue monuments and their dedication events paralleled the triumph of Jim Crow and the Lost Cause. Does this dedication mark a similar pivot in Richmond history? Absolutely.”

He added: “The way we approach and discuss the many monuments across our city is now forever altered. We must take advantage of this moment. This is more than the intersection of two streets. It is a powerful intersection of ideas that provides this city the opportunity to imagine its future.”

In June, the VMFA board unanimously approved the acquisition of “Rumors of War” for an undisclosed sum. The acquisition — the most expensive one of a sculpture the VMFA has ever made — was funded by an endowment of private donations.

Photos of the sculpture starting popping up on social media last week as the sculpture was being lowered by crane on its giant pedestal.

The title of Wiley’s artwork alludes to Jesus’ speech from Matthew 24:6: “You will hear of wars and rumors of wars, but see to it that you are not alarmed.”

“The idea is that in the ‘change times,’ there will be wars and rumors of war. … And there are moments where art has to step in,” Wiley said.

The artist also spoke of how his work is “about brushing off and dusting off the things we’ve seen in the past. Art has always been about what we as a people say yes to. And these things change. Culture evolves.”

Monument Avenue is home to statues of several Confederate generals, which began to be added a quarter-century after the Civil War. When the monuments were erected, they were accompanied by parades that stretched for miles and served as a reunion of sorts for Confederate veterans.

In 1996, amid much controversy, a statue of Richmond native Arthur Ashe — an African American tennis great and civil rights leader — was added to the avenue.

In recent years, state lawmakers have questioned whether the Confederate statues should be removed or contextualized. Virginia state law currently protects the removal of statues as war memorials.

In 2017, the deadly Unite the Right white nationalist rally in Charlottesville prompted some lawmakers to propose legislation that would empower localities to decide whether to keep, remove or relocate Confederate monuments.

While under Republican control, the Virginia General Assembly struck down bills that would let localities make their own decisions on the fate of the statues.

But both chambers of the legislature flipped to Democratic control in November’s elections, and Democratic Gov. Ralph Northam has said he supported moving Confederate monuments to museums. The General Assembly will convene in January.

Stoney appointed a commission to study the statues on Monument Avenue. The commission recommended removing the monument to Jefferson Davis, the president of the Confederacy, and adding context to the other Confederate statues.

Many people have expressed concern that “Rumors of War” may be vandalized, as several of Richmond’s monuments have been in recent years.

The sculpture’s base is coated in a graffiti-resistant material, and VMFA will have security and cameras 24 hours a day, 365 days a year.